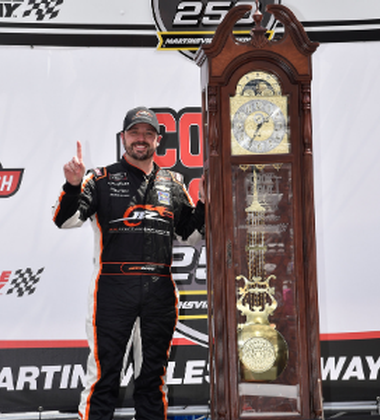 Josh Berry had to wait nearly two days for the Sunday conclusion of the Cook Out 250 at Martinsville Speedway, but it was a worthwhile delay for the late model ace.

Driving for JR Motorsports car owners Dale Earnhardt Jr. and Kelley Earnhardt Miller, Berry took the lead from Ty Gibbs on Lap 223 of 250 and held it the rest of the way to win his first NASCAR Xfinity Series race in his 13th start.

In a race that was halted by rain after 91 laps on Friday night and restarted at noon on Sunday, Berry beat JR Motorsports teammate Noah Gragson to the finish line by .590 seconds. Both Gragson and Daniel Hemric passed Gibbs during the closing run to finish second and third, respectively.

For Gragson, that meant an extra payday of $100,000 as the highest finisher among four eligible Xfinity Dash 4 Cash drivers.

But the day belonged to Berry, who led a race-high 95 laps, 10 before the rain arrived on Friday and 85 on Sunday. Berry is the first driver to win an Xfinity race in the No. 8 car since Earnhardt Jr. prevailed at Michigan in 2006.

“Oh, gosh, I have so many people I could thank I could be here until tomorrow morning,” Berry said after climbing from his car on the frontstretch at the .526-mile short track. “Just Dale, L.W. (Miller), Kelley, everybody for believing in me, everyone on this No. 8 team.

“Man, they’ve been through a lot the last couple of years. Had a ton of different drivers. Man, I wanted to win so bad for these guys. They’re such a great group. I knew this would be a good opportunity to win. (Crew chief) Taylor (Moyer) called a perfect race. The car was good, and we just kept tweaking on it. The tires were pretty worn out there at the end. I was struggling a little bit with wheel-hop… This is just unbelievable.”

Gragson had good reason to feel mixed emotions about finishing second to a driver he called “a legend in short-track racing.” The driver of the No. 9 JRM Chevrolet had to play defense during the final run to keep Hemric behind him.

“I really wanted to win there,” Gragson said, “but I was having to protect the bottom to keep the guys behind me from moving me out of the way. I couldn’t open up my arc the way I needed to and make speed with that.”

The Dash 4 Cash bonus was a welcome consolation.

Gibbs held the fourth spot, followed by Joe Gibbs Racing teammate Brandon Jones, who had just taken the lead from Berry when storms stopped the action on Friday night.

Though he’s not driving in the series full-time, Berry also earned eligibility for the Dash 4 Cash bonus in the April 24 Xfinity race at Talladega, along with Gragson, Hemric and Jones.

This was Berry’s second Martinsville Grandfather Clock as he won the 2019 ValleyStar Credit Union 300, the nation’s biggest, richest and most prestigious NASCAR Late Model Stock Car race. He is the reigning champion for the race that will return on Sept. 25 after being canceled in 2020 due to the COVID-19 pandemic.