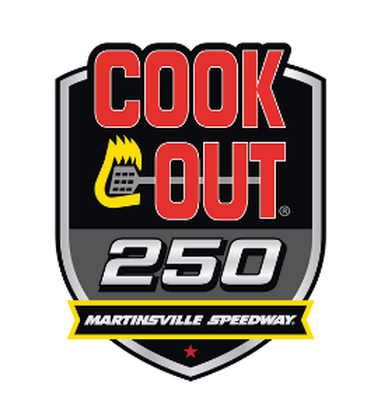 “Cook Out has been serving fresh burgers, barbecue, hot dogs and shakes to NASCAR fans across the south for over 30 years, so we are proud to welcome them as an official partner of Martinsville Speedway,” said Martinsville President Clay Campbell. “We look forward to Cook Out helping us fire up the NASCAR Xfinity Series over our spring race weekend with the Cook Out 250.”

Cook Out will have a substantial presence with at-track signage this race season at Martinsville Speedway.  As part of the partnership, Cook Out will have additional sponsorship rights with Martinsville for point-of-sale, advertising collateral, in-market promotions, consumer sweepstakes and integrated digital campaigns. The brand is also an official partner with NASCAR legacy tracks, Darlington Raceway and Richmond Raceway; including the entitlement for the 72nd running of the Cook Out Southern 500®, which will launch the NASCAR Cup Series Playoffs for the second consecutive year on Sunday, Sept. 5.

“We are excited and thankful to expand our NASCAR partnership with the Cook Out 250 at Martinsville Speedway, a track that’s close to home,” said Jeremy Reaves, CEO, Cook Out.

Since opening its first restaurant in Greensboro, N.C., Cook Out is known for its fresh burgers, barbecue, hot dogs and shakes as part of the “best combos in town.” The restaurant chain has since grown to nearly 300 locations across 10 states (Alabama, Georgia, Kentucky, Maryland, Mississippi, North Carolina, South Carolina, Tennessee, Virginia, and West Virginia).

To learn more about Cook Out and find the nearest location, visit cookout.com.

Martinsville will host its first-ever three race weekend of night races on April 8-10. For the first time since 2010, the NASCAR Whelen Modified Tour will compete in the Virginia is for Racing Lovers 200 on Thursday, April 8. Martinsville will host a Cook Out 250 NASCAR Xfinity Series Dash 4 Cash race on Friday, April 9 at 8:00 p.m. and the Blue-Emu Maximum Pain Relief 500 NASCAR Cup Series race on Saturday, April 10 at 7:30 p.m.