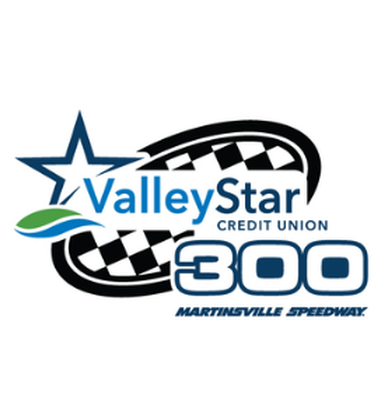 On Friday, Sept. 24, four hours of practice will be followed by single car qualifying under the lights. The top two cars from qualifying will make the 200 lap feature with the pole winner receiving a $5,000 bonus. To determine the rest of the 40-car field for the feature, the remaining cars will be placed in heat races on Saturday, Sept. 25. There will be four heat races of 25 laps and no last chance race.

“This year’s format will challenge competitors on the track and keep fans on the edge of their seat with fierce action in the ValleyStar Credit Union 300,” said Martinsville President Clay Campbell. “Martinsville Speedway has always been a track that challenges the best in motorsports, so we look forward to this year’s ValleyStar Credit Union 300 increasing the heat of compeititon in the nation’s biggest, richest and most prestigious NASCAR Late Model Stock Car race.”

In the ValleyStar Credit Union 300 feature, the leader of each lap will receive $25 with $5,000 available in the laps led bonus pool. If the race concludes in overtime, there will be unlimited attempts at a Green White Checker finish.

On Friday, Sept. 24, practice for the ValleyStar Credit Union 300 will be held from 2:00 p.m. to 6:00 p.m. followed by single car qualifying under the lights beginning at 8:00 p.m. The Campbell Family Foundation will host a fireworks extravaganza following ValleyStar Credit Union 300 qualifying and the Josh Shilling & Mountain Heart concert on the Bassett Furniture Stage at the Henry County Fair.

Tickets for the ValleyStar Credit Union 300 are $30 and unreserved. Youth 12 and under are free with a paying adult. Parking is free for the event. Coolers are allowed, but must be softsided and no larger than 14”x14”X14”. Tickets are available for purchase at the ticket office, via phone at 877-RACE-TIX or online at martinsvillespeedway.com.

For more information on the ValleyStar Credit Union 300, visit www.martinsvillespeedway.com/events/valleystar-credit-union-300.

NASCAR returns this fall as Martinsville Speedway hosts the penultimate races of the NASCAR Cup Series, NASCAR Xfinity Series and NASCAR Camping World Truck Series seasons on Oct. 30-31. On Saturday, Oct. 30, Martinsville will host a doubleheader with the NASCAR Camping World Truck Series Playoff race at 1:00 p.m. and the Dead On Tools 250 NASCAR Xfinity Series Playoff race at 6:00 p.m. The NASCAR Cup Series’ Championship 4 will be set in the Xfinity 500 on Sunday, Oct. 31 at 2:00 p.m.