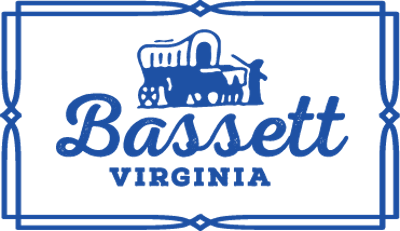 Do you own a piece of Bassett Furniture?

Meet the namesake community where this pace-setting brand of home products was created: Bassett, Virginia.

Bassett is a community steeped in history and known for its world-class genealogical facility, excellent trout fishing on the Smith River and abundant recreational opportunities at Philpott Lake. An annual celebration of the community's history, the Bassett Heritage Festival, is held on the second Saturday of each September in downtown Bassett.

Two railroad companies began building their rail lines to connect Roanoke, Virginia to Winston Salem, North Carolina in the early 1880's. In 1896 Norfolk and Western purchased the 122-mile stretch of track that has so many wiggles and curves that the railroad called it the "Pumpkin Vine". The name remains today.

The railroad and Bassett Furniture Company began an early relationship when the Bassett brothers began running a saw mill and supplying the railroad with railroad ties used in the construction of the line. That early relationship marks the beginning of the little town of Bassett. In 1902, the brothers converted their saw mill into a furniture factory and developed their business into what was once labeled the world's largest manufacturer of wooden furniture. This would be the first of many such businesses to operate in the area giving Henry County, Virginia Deep Roots in the furniture industry.

In the early 1900's, Bassett and most of the communities downstream were susceptible to flooding from the Smith River during heavy rains. The flood of 1937 nearly washed the town away, leaving water and mud three feet deep in some stores and homes along the river's edge. In 1944, Congress authorized construction of Philpott Lake for flood control and hydroelectric power generation. Construction began in 1948 and the dam was fully operational by November 1953. Visitors to Philpott Lake nowadays can enjoy fishing, boating, hiking, camping and one of the most beautiful scenic views in Southern Virginia.

Fun Fact: Did you know that furniture is still produced in Bassett? Watch to discover about their new Bench*Made line of fine home furnishings.

Visit our calendar for full details on each event