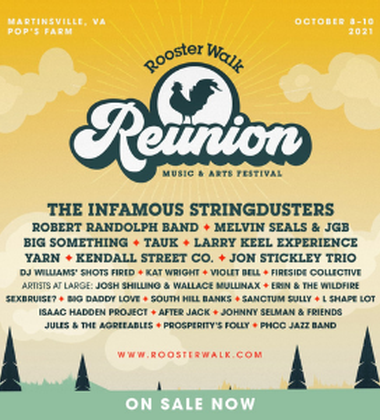 As the United States steadily increased vaccination totals, and slowly lessened restrictions governing social interaction, millions of Americans began reuniting with family and friends. Whether it was a long awaited hug between a grandparent and grandchild, or that first dinner among friends in what felt like forever, these moments, once taken for granted, were received with joyous celebration.

Things are no different at the headquarters of Rooster Walk, a nonprofit in Martinsville that raises money for local charities through live music events. Though their keynote event, the Rooster Walk Music & Arts Festival, typically held in late May, was cancelled for the second consecutive year, organizers Johnny Buck and William Baptist had plans to get the whole festival family back together for a new fall event that will feature three days of music, arts, food, camping, dancing, laughing and more.

“The Rooster Walk Reunion is exactly what it sounds like,” said Buck, who, along with Baptist, put on the first Rooster Walk Music & Arts Festival in 2009. “We want to bring our whole festival family back together. The folks we love, and the folks who love us. The entire band lineup consists of acts that have played at least one prior Rooster Walk, and some have played all 11. We’re bringing back our favorite food and craft vendors. And, of course, we can’t wait for the fans to return to Pop’s. Our fans are the heart and soul of the festival, even more than the bands. It’s been way too long, and we’ve all been hurting without live music during this pandemic. This is going to be a beautiful, cathartic event for everyone.”

The Reunion will be smaller than a normal Rooster Walk, with attendance capped at 2,500 for the three-day event. That’s because, simply put, the organizers wanted to plan a festival that had the best possible chance of being allowed to take place by state authorities. Pop’s Farm and its 150 acres provide ample room for folks to spread out, not to mention on-site camping for motorhomes and tents.

Musical acts will cover a wide range or genres, including rock, blues, jam, funk, bluegrass, country and more. Tickets are now on sale and going fast. For a full list of the band lineup, and ticket information, visit www.RoosterWalk.com.

The festival organizers will be implementing rigorous safety and sanitation measures, working closely with state and local health department officials throughout the planning and execution process.

“Our number one goal is to make the festival safe and fun,” said Buck. “We’re getting the whole gang back together at Pop’s, and new family members are always welcome.”