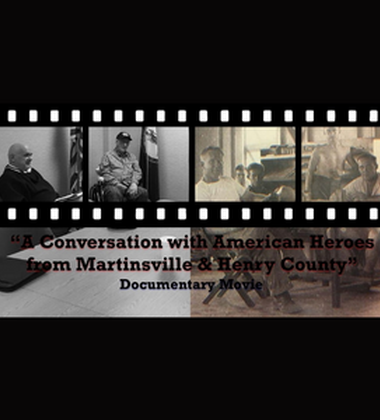 The Martinsville-Henry County Historical Society will premiere the movie documentary, “A Conversation with American Heroes from Martinsville & Henry County,” on Sunday, May 29, 2022, at 3:00 P.M., in the Walker Theatre of Patrick & Henry Community College.

John Phillips, President, Martinsville-Henry County Historical Society, stated, “Our documentary movie achieves the Historical Society’s mission of collecting, transcribing, and publishing oral histories and stories about our past. It also demonstrates why we feel so strongly about listening to and recording oral history – eleven of the thirteen Veterans interviewed are now deceased.”

The Commission, appointed by the Virginia General Assembly, planned, developed, and carried out programs and observances to mark the 100th anniversary of World War I (WWI) and the 75th anniversary of World War II (WWII). The Commission's work is guided by its purposes to: Honor our veterans, whose sacrifices can never be forgotten, and, in doing so, communicate to today's service members that they will be remembered; inspire a desire to learn more by providing opportunities for Virginians to explore personal connections to WWI and WWII and by highlighting multiple aspects of the state's role in both wars; and connect through travel and tourism by helping visitors to connect to museums, memorials, and sites in Virginia related to WWI and WWII.