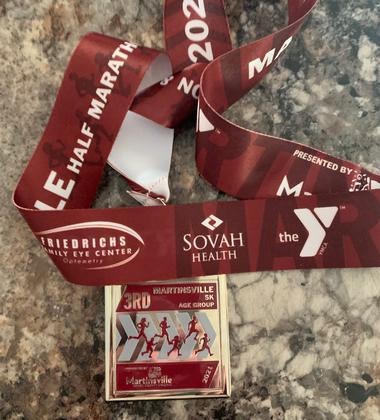 The 5K portion of the annual Martinsville Half Marathon & 5K was the second race in the 2021 Miles in Martinsville race series, for #TeamVisitMartinsville, Kelly Rowland and Beth Stinnett; whom both say we're happy to participate! “The excitement and adrenaline amongst the 200+ runners was very contagious and motivating and made me want to do my best, despite the cold temperature,” says Stinnett.

Recap from the experience:

1. What did you enjoy the most about the Martinsville 5K?

Kelly’s response: I enjoyed having the flexible option to run virtual. I was able to still participate in the event since I was out of town for the actual event.

Beth’s response: I enjoyed the layout of the course. It was a new route for me and the design was well executed.

2. As a runner, did you learn anything from the first 5K of the season?

Kelly’s response: It was a great kick-off run to get a good feel for what my goal should be for the next one!

Beth’s response: Have fun with it. If you have to stop, allow yourself to stop for a few seconds and keep on keeping on! Also, I feel like I’m also getting better at running in cold(er) temperatures.

Looking ahead at the next race:

1. For the Sova Health Super Run, will you be running the 5K portion or the 8K?

Kelly’s response: I'm doing the 5K! I look forward to beating my time from the previous 5K!

Beth’s response: I’m doing the 8K! This will be my first 8K event and I am looking forward to getting out there and giving it my best!

2. Who are you dressing up as for the Sova Health Super Run?

The next race in the Miles in Martinsville Series is the Sova Health Super Run on Saturday, May 8th, which offers a 5K option and an 8K option. Both, Kelly and Beth, opted for the 8K; the equivalent of 4.97 miles! The Super Run is a superhero-themed event that encourages participants to dress as their favorite superhero while running (or walking) the race. Sounds fun, right? Go ahead and sign up now at www.MilesinMartinsville.com while there’s still time! Families are encouraged and will have a blast!