Home | Blog| The Science of Flight exhibit is set to soar Saturday, January 22 at the Virginia Museum of Natural History

The Science of Flight exhibit is set to soar Saturday, January 22 at the Virginia Museum of Natural History 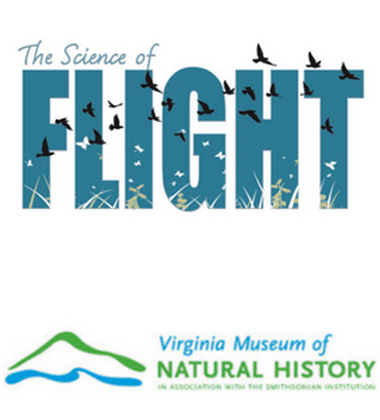 Humans may rule the air today, but our ability to take flight wouldn't have been possible without studying the first masters of the air: birds, bats, reptiles and insects. On Saturday, January 22, 2022, the Virginia Museum of Natural History (VMNH) will unveil The Science of Flight, an original, multilingual, special exhibit providing visitors an in-depth look into the many different methods animals take to the air and how studying the animal kingdom provided the basis for humans' ability to take flight. To celebrate opening day, the museum is hosting The Science of Flight Festival, featuring additional, one-day-only, flight-themed offerings, including live birds of prey.

Featuring a multitude of scientific specimens from the museum's collections of birds, mammals, insects and fossils, the exhibit explores a variety of topics ranging from the aerodynamics of flight to the unique wing mechanics of different animal species, both living and extinct.

"We hope visitors will leave with a better understanding of the science behind animal flight, as well as a greater appreciation for the amazing diversity of animals that can fly,” said VMNH Curator of Mammalogy Dr. Nancy Moncrief, one of several museum curators who helped develop the exhibit.

While much of the exhibit focuses on animals of today, VMNH Assistant Curator of Paleontology Dr. Adam Pritchard lent his expertise during the development of the exhibit to make sure flying and gliding creatures long since extinct get their proper due.

"Powered flight and gliding have left their traces in the fossil record of the past 300 million years," said Pritchard. "Virginia is actually the home of one of the strangest gliders in the fossil record; a long-necked reptile with slender ribs that supported gliding wings. Named Mecistotrachelos, this glider is only known from the Solite Quarry site southeast of Danville, Virginia."

Insects play a prominent role in the exhibit, with VMNH Associate Curator of Recent Invertebrates Dr. Kal Ivanov not only providing fascinating specimens from the museum's insect collections, but also his expertise of the insect world to supply visitors with compelling realities about insect flight. Among other facts, visitors will learn that insects are the only modern invertebrates (animals without a vertebral column) that have the ability to fly and that, today, the majority of the estimated 1,000,000 described species of insects can fly.

With accessibility in mind, The Science of Flight will also mark the first VMNH special exhibit to be featured in both English and Spanish.

"The museum is proud to offer The Science of Flight in both languages as part of our ongoing efforts to achieve greater levels of accessibility throughout the museum experience," said VMNH Deputy Director Ryan Barber. "Thanks to a grant provided by the Harvest Foundation and United Way of Henry County & Martinsville, this self-guided exhibit will include text displays explaining each aspect of the exhibit to visitors in both English and Spanish."

In celebration of opening day, the museum is hosting The Science of Flight Festival from 10 a.m. to 4 p.m. on Saturday, January 22, with special one-day-only, flight-themed offerings, including live birds of prey.

"It's been two years since we unveiled our last special exhibit and we're looking forward to offering museum visitors and members a fresh new experience with The Science of Flight," said Barber. "While we believe the exhibit will be an experience in and of itself, we're excited to provide attendees with an additional lineup of flight-themed offerings to celebrate opening day."

Planned festival offerings include:
Live birds of prey (falcon and barn owls) with licensed Master Falconer and Raptor Expert Robb Herbst
Balloon animals
Food trucks (lunch and snack items available for purchase)
A variety of flight-themed activities and crafts, including a maker space mini-parachute creation activity
Special flight-themed displays presented by museum curators and researchers
Animal flight-themed books and activities hosted by Blue Ridge Regional Library
A free giveaway for the first 500 children in attendance
Specifically for adults, the museum is offering "The Flight" from 1 to 4 p.m. Featuring Twin Creeks Distillery and Mountain Valley Brewing, both entities will be providing a limited number of 3 ounce pours of their select products to visitors 21 and older. Additional fees will apply.

To attend, VMNH is requiring visitors to wear face coverings while inside the museum. Visitors will need to provide their own face coverings.

Admission to the special exhibit and opening day festival is included in the price of general museum admission, which is $10 for adults ages 18-59, and $5 for children and youth ages 3-17, as well as seniors 60+ and college students. Admission is free for children under 3, VMNH Members, and members of ASTC Passport participating institutions.

Through the Institute of Museum and Library Services' Museum's for All program and additional funding provided by Hooker Furnishings, museum admission is also free for all EBT cardholders now through April 2022. To qualify for this free admission program, visitors must present their EBT card and accompanying photo ID at the museum box office.

The Science of Flight exhibit and opening day festival are made possible thanks to the support of Carter Bank & Trust, The Helen S. and Charles G. Patterson, Jr. Charitable Foundation Trust, the United Way of Henry County & Martinsville, and the Harvest Foundation.

To learn more about the Virginia Museum of Natural History's exhibits, visit www.vmnh.net/exhibits.