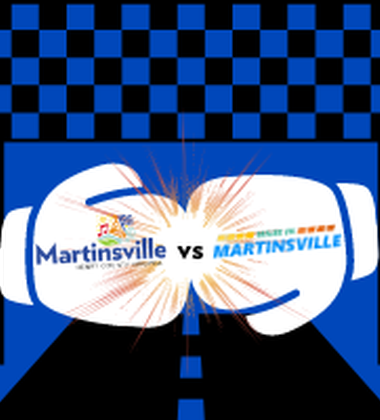 VisitMartinsville is a long-time sponsor of the Miles in Martinsville Series, but the 2021 season will be a little special. This year, two VisitMartinsville staffers will be lacing up their running shoes and trying their hands at each of the seven footraces that are scheduled. Why two staff members? Why this year? That’s simple. We were double-dog dared to by - - well, we shouldn’t say. Ok, it was Joe Philpott! Plus, why not?

Kelly Rowland, Tourism Marketing & Client Relations Manager, and Beth Stinnett, Tourism & Film Office Coordinator, will both be running in each of the scheduled Miles in Martinsville races with the first one coming up this weekend! Their goal? To have fun while running all 7 races.

Both Kelly and Beth say that they don’t consider themselves competitive runners, but they do enjoy it.

Question 1: One a scale of 1 to 10 with 1 being rookie and 10 being expert, how would you rate yourself as a runner?

Kelly’s response: I would say I’m a 4. I ran every race last year and I think I most definitely got to a strong 5 or 6, but new year, new start since I haven’t kept up the running.

Question 2: What time are you expecting to get for this weekend’s 2 mile race?

Kelly’s response: I am pushing for 25 mins but I want to make it in no less than 29 mins. (My last 5k time was 31 mins so I feel comfortable with this goal, but stay tuned I have not been practicing)

Beth’s response: I hope that I can complete the race in @ least 30:00 minutes. Sounds doable, right?

Question 3: Are you planning to run the Half Marathon on April 3rd or will you be running the 5K instead?

Kelly’s response: I’ll most definitely be doing the 5k but I will say at the end of the season last year I started to feel froggy and had high hopes to do the half this year (after nail the rail, what’s a few more right?!) After a looooooonnnngggggg break I have not prepared but I have it on my bucket list!!

Beth’s response: The 5K. I am interested in trying a Half Marathon one day. Maybe I can spend this year training and be ready to run the Martinsville Half Marathon in 2022.

How do you think the VisitMartinsville team will do this weekend? Follow their journey on Facebook and Instagram to find out and to show your encouragement!