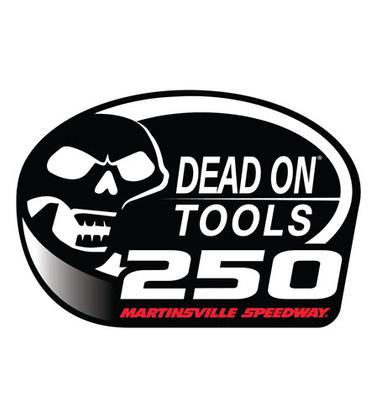 “Martinsville Speedway is known as one of the most challenging tracks in NASCAR, so we are proud to continue our partnership with a tough, innovative brand in Dead On Tools,” said Clay Campbell, Martinsville Speedway President. “As we celebrate the track’s 75th anniversary, we look forward to once again hosting the fierce action of the penultimate race of the NASCAR Xfinity Series season in the Dead On Tools 250.”

As part of Martinsville Speedway’s 75th Anniversary season, the track will host the penultimate race of the Xfinity Series Playoffs for the third consecutive season on Saturday, Oct. 29. The Dead On Tools 250 will be another historic battle to set the field for the Xfinity Series Championship the following week at Phoenix Raceway.

“We are extremely excited to welcome fans back to Martinsville Speedway for the second running of the Dead On Tools 250,” said Brian Ranallo, Marketing Manager, Dead On Tools. “Last year was a huge success – action-filled and we loved connecting with the fans. Martinsville is a great fit for us, and we look forward to getting back on property to keep the party rolling at the end of the season!”

At the Busch Light Clash at the Coliseum on Sunday, Feb. 6, the culmination of a two-day celebration of speed inside the historic Los Angeles Memorial Coliseum, Dead On Tools will have a presence. The brand will have signage at the historic venue and impact the local community by donating a limited number of exclusive tickets to a local charity. Tickets for both days are available for purchase at www.nascar.com/lacoliseum. Access to the NASCAR Fan Fest, offering interactive opportunities for fans of all ages, is included with all ticket purchases.

Dead On Tools is one of the world’s fastest-growing brands of hardware and storage gear today. From its humble beginnings, Dead On Tools has grown to be a household name within the trade. If you enter any job site, chances are you will find Dead On Tools. Their cornerstone products, such as their investment cast hammers, helped build the way for the brand.

Today, Dead On Tools still carries its namesake hand tools, but has focused intently on mastering professional tool belts and other styles of gear. The latest installation of tool belts includes serious upgrades like the professional suspension system and belt that boasts a maximum width of 52" around. Additional hand tools started development like the Exhumer nail puller series and the ever-popular Annihilator wrecking bars. These innovations have helped keep Dead On Tools at the front of the pack.

Dead On Tools has been expanding its brand, promoting the Made To Live Out Loud campaign. The brand understands that hard work is an empowering lifestyle that should be celebrated. Dead On Tools has partnered with organizations like NASCAR to help show that Dead On Tools “Lives Life Out Loud.” To learn more about Dead On Tools and its best-in-class products, visit deadontools.com.

In the fall, Martinsville will host the NASCAR Whelen Modified Tour season finale on Thursday, Oct. 27 and penultimate races with the Dead On Tools 250 Xfinity Series Playoff race on Saturday, Oct. 29 at 3:00 p.m. and Xfinity 500 Cup Series race on Sunday, Oct. 30 at 2:00 p.m. In short track battles that can only happen at Martinsville, the fall races will crown the Whelen Modified Tour champion and set the field for the Xfinity and Cup Series championships the following week at Phoenix Raceway.

NASCAR tickets are available for purchase today via phone at 877-RACE-TIX or online at martinsvillespeedway.com.